Thank you for your interest in Cruz Battery Metals

Announced on March 31, 2022, President Joe Biden enacted the Defense Production Act to increase domestic production of strategic and critical materials, such as lithium and cobalt, needed to build batteries for electric vehicles and other types of energy technologies. This could provide a major catalyst and sector momentum for developing domestic sources of battery metals, which is Cruz’s goal for the Solar Lithium Project.

This, and other recent developments have sparked a renewed interest in Cruz at a time when the demand for battery metals has never been stronger. Lithium prices are currently at ALL-TIME HIGHS, up over 1,000% since January 2021. Cruz is in a great position to capture additional market share within the insatiable battery metals super cycle as the Company prepares to enter the most active time in recent history.

Jim Nelson, President of Cruz Battery Metals stated, “We are very encouraged by the fact that lithium is present on the Northern portion of our large property, being discovered more than 4 km’s to the North of any previous hole drilled. We’ve now discovered the presence of lithium in all 6 holes drilled to date on the Solar Lithium Project, data provided by the first two phases of drilling will allow the Company to plan a larger phase III program in the second half of 2022. Cruz has a large footprint and a similar size property to our neighbor, American Lithium. Cruz’s goal is to locate and provide a new, domestically sourced, battery grade lithium deposit.”

During the phase I drill program, Cruz Battery Metals drilled a significant new lithium discovery in Nevada with values as high as 1,300 ppm Li. Multiple intercepts of the targeted potential lithium-bearing claystone formation were encountered in all the holes drilled in this initial phase of drilling. Values in Hole-1 were as high as 1,300 ppm Li and encountered lithium bearing clays from 10 feet to 200 feet with a 60-foot intercept averaging 968.33 ppm Li.  Hole-2 had a high value of 1120 ppm/Li including a 60-foot interval averaging 768 ppm/Li.

Prior to receiving the drill results, significant intercepts of the targeted potential lithium-bearing claystone formation were encountered in all the holes drilled in phase I.  Hole 2 encountered a very substantial 345 feet of the targeted potential lithium-bearing claystone.  Hole 1 intercepted approximately 180 feet of claystone formation starting from 10 feet below the surface.  Cruz’s sampling program discovered 5 separate samples with lithium values over 1059 and one as high as 1610 ppm Li.

Cruz also has exposure to the lithium market through its strategically located ‘Clayton Valley Lithium Project’ in Nevada, USA. Nevada lithium companies have recently experienced a resurgence since Tesla’s Battery Day, held on September 22, 2020, where Tesla’s Elon Musk announced their intention to acquire Nevada lithium projects and their overwhelming need to secure domestic lithium deposits to feed their Gigafactory. Also in Nevada, energy behemoth Schlumberger (SLB-NYSE), through its strategic partnership with Pure Energy Ltd. (PE-TSX.v) has built a lithium brine pilot plant with approximately $30 million USD being spent in developments, directly bordering Cruz’s Clayton Valley lithium project. As an early mover in this play, Cruz is one of the few companies (Albermarle, Pure Energy, Spearmint Resources & Sienna Resources) to have access to the deepest parts of the only lithium brine basin in production in North America.

As you can see there are many exciting and compelling things coming ahead for Cruz which is why you should be paying close attention to the company right now.

Lithium prices have broken out to all-time highs, increasing by over 1,000% since the start of 2021. The focus on the commodity is clearly on the rise as demonstrated by the 1-year and 5-year charts below: 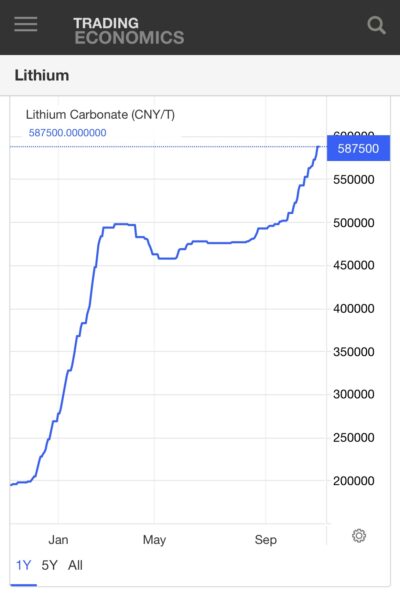 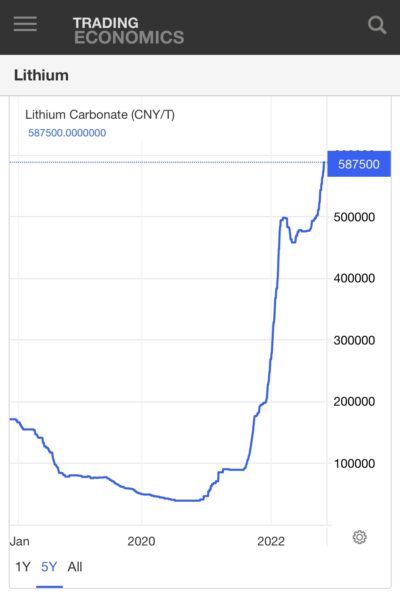 Lithium prices have broken out to ALL-TIME highs, and are now up over 1,000% since the start of 2021

Cruz Battery Metals' phase I drill program on the Solar Lithium Project makes a significant new lithium discovery in Nevada with values as high as 1,300 ppm/LI

Hole-2 of the phase-I drill program encountered a very substantial 345 feet of the targeted lithium-bearing claystone while hole-1 intercepted approximately 180 feet of claystone formation starting from 10 feet below surface.

Cruz Battery Metals' Clayton Valley Lithium Project that is strategically located in the Clayton Valley of Nevada with access to deepest parts of the only lithium brine basin in production in North America.

Cruz is one of the largest landholders in the historic silver-cobalt producing region of Cobalt, Ontario

If you would like to reach us directly, you may do so by following any of the communication channels listed below. Alternatively, you may subscribe to our mailing list by completing and submitting the form attached hereto.

Management cautions that past results or discoveries on properties in proximity to Cruz may not necessarily be indicative to the presence of mineralization on the Company’s properties. Mr. Greg Thomson, P.Geo., a Qualified Person as defined by National Instrument 43-101 has reviewed and approved the scientific and technical disclosure contained within this website.

We only email what’s relevent – no spam.

We’ll keep you up to date, but we won’t spam you.